We left the Bougainvillea lodge disappointed that we hadn’t seen any giraffes the day before, but Juma told us that people often see them on the way back to Arusha as the animals frequently move in and out of the conservation area sometimes even crossing the road.

On the way out, it must have been National Baboon day as there were close to a hundred of them along the road. 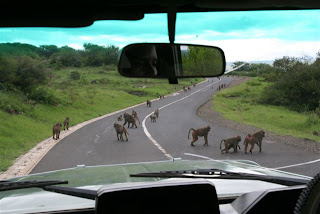 We made one last stop at a carving shop as one of us had to get a souvenir for a friend. We hit the mother-load of ebony and rosewood carvings making us wish we had done all of our shopping here. 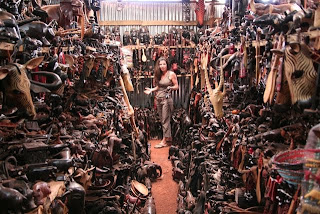 Back in the car, we continued our trek to Arusha. Juma has amazing eyesight and spotted a single Giraffe's head popping up in the bush. 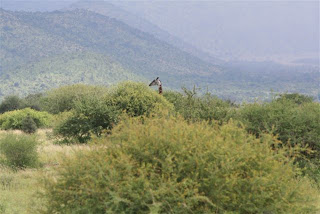 We stopped the car to get a picture, and then we started spotting them all over. The coolest part about experiencing this is that these guys are just wild in the bush; we’re not in a park or conservation area – this is just Africa. There were two males and one female in this one spot. The males were trying to court the female as it is the frolicking season. 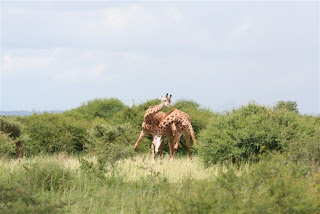 Pictured here is the process of “necking.” The two males will continue to smack each other’s necks until one grows tired of the practice. Whoever lasts the longest gets the girl. 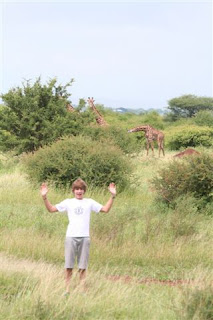 We were able to get rather close to them. They didn’t seem to care that we were there, although one of them always kept an eye out to see what our intentions were. 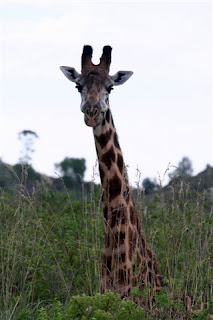 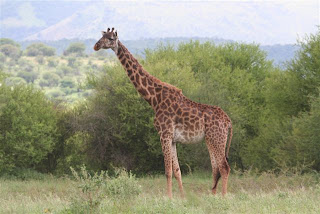 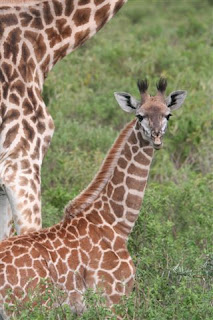 This little guy was so cute and apparently last season’s offspring. He stayed close to his Mom and would occasionally try to nurse, but it seemed she was trying to wean him off of her milk because she wouldn’t let him. 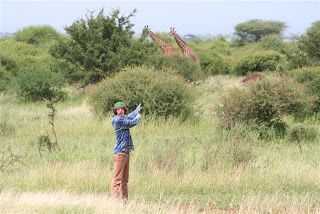 The men kept a look out for lions, leopards, cheetahs, or other predators while the kids posed for pictures. It’s strange to think that there might be something lurking in the bush out here in the open. 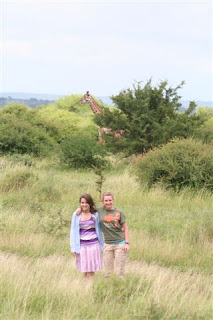 We were simply amazed to see them in their natural habitat.

Last stop was a snake and reptile farm; not nearly as exciting as seeing the giraffes, but enjoyable nonetheless. 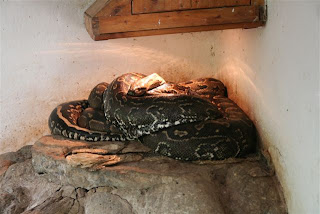 This little guy was responsible for swallowing a sleeping security guard. Not to worry though as there have only been six confirmed cases of humans being swallowed by pythons in the world. In most cases, the person was taking a nap and was an easy target. If ever you're sleeping outdoors in Africa, sleep with one eye open! 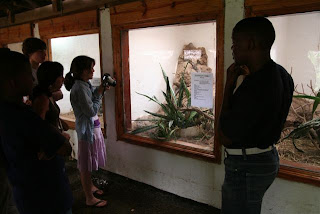 Some of us took turns holding one of the harmless critters…others didn’t.

After a quick lunch at Pepe’s (Italian/Indian Food) we headed back to the UAACC to wind the day down with the kids and the locals. We’re looking forward to attending the University of Arusha S.D.A. church tomorrow.