Today we headed out to the market this morning; we needed to get a few items including bath towels. It would appear bath towels are a luxury here and we didn’t even consider bringing them from home.

On our way to the market we were pulled over by a governement official standing by a pull-off on the side of the road - he was pulling cars over at random. He took one look in and said something to Juma in Swahili and we were off again.

Puzzled, we asked Juma what that was all about. He told us that government corruption was a prevalent thing in Africa and Tanzania was no exception. This was reminiscent of our trip to the Congo where we went through a few military check points and were required to pay a "whatever you can afford to pay" toll. However, the people in Tanzania are very protective of the tourist trade here and knowing that extortion makes us nervous, the official waved us on. Juma told us that if it were just him in the car, he would have had to give him some money.

Given that the unemployment rate here is around 50% and governement payroll is certainly not a guaranteed thing, it should not be shocking to know that people in power do what they have to in order to survive. It is perhaps unnerving to those of us in the west, but it is a way of life here and the subsidizing is relatively small being considered a "perk" of the job - just like a waiter working for tips I suppose.

We stopped at a well stocked crowded grocery market where the kids and adults alike started ooing and awing at the proprietor’s goods. It’s always a good time to see what goodies are available in other countries as they tend to cater to local tastes. Armed with our towels, a couple of local sweets for us, and lollipops for the orphans we headed to the Arusha Cultural Center. 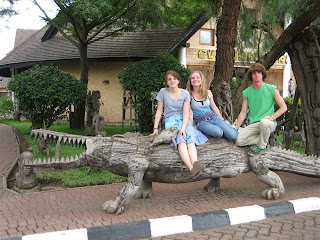 At the cultural center we were immediate impressed with the number of ebony carvings, sculpture, antiques, art, etc. amassed. The works of art were very impressive and unlike anything we had seen before. The Kazuri beads (which are only in East Africa) are individually handmade and simply beautiful. From the flawless Tanzanite collection and other fine jewels to the expansive ivory collection and exotic instruments…this was dizzying. This was not a bargain mart however in which the vendor could be haggled with, but more like a fine art collection (from the immediate area) commanding an equally impressive price. The kid’s loved it, but are anxious to go to the Maasai market where their hard earned dollars will go a little further based on how well they haggle!

Upon our return to the UAACC, the kids wanted to distribute their personal belongings, they had brought with them from home, for donation to the local villagers. We walked to a particular family's dwelling that we learned was in dire need and proceeded to hand out clothing, shoes, and some toys. 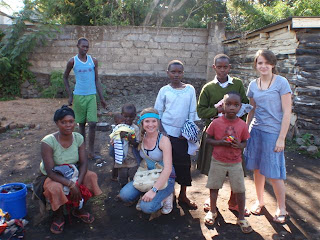 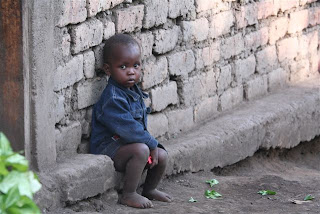 They were so grateful, drawing the attention of some passerby’s who welcomed a brief break from the afternoon duties or play time. 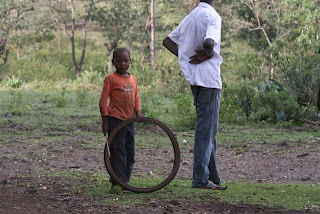 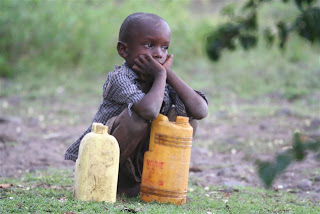 The woman of the house (Agnes), had a little store she earned a modest living from selling a few sodas and snack items; she invited us to purchase some soda...which we did. 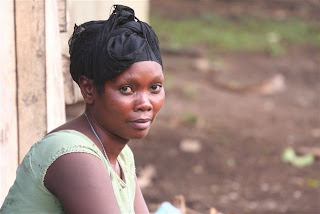 Agnes
We stayed, playing with the children, and enjoyed sharing each other’s company. 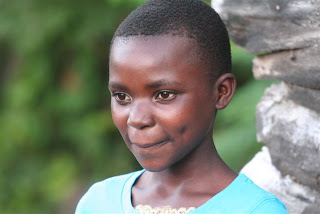 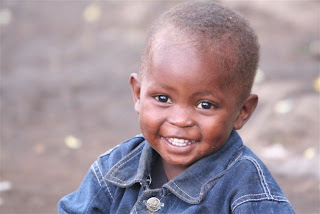 When we said goodbye, they were disappointed and invited us to come back – that we will!

Back at the UAACC, the boys played basketball with a few of the orphanage workers. For all those that have played basketball with Paul and Doug…they were well behaved dialing it way back. Not sure if they were just holding themselves back, the altitude (4300ft) was keeping them from operating at full steam, or they’re just getting old! 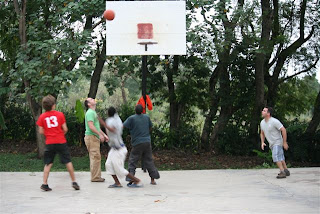 The UAACC orphans have warmed up to us and embrace us without inhibition. We taught them several songs tonight with an overwhelming favorite being “Making Melodies.” They’ve taught us a few songs as well. 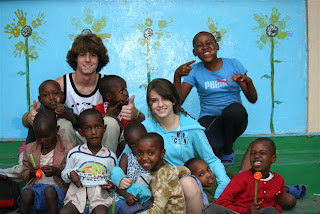 They are so precious and they’ve established a nightly ritual of giving hugs and kisses goodnight after dinner and on their way to bed - truly a precious and treasured gift.

Another great day enjoying the people and rich beauty of Tanzania

Posted by Mission Trips at 8:49 AM