Today we started out by going to the Masai market – a kind of street bazaar – where your bargaining skills would make the difference between leaving with no money or just a little. The kids learned, from Juma, that one asks what the “standard” price is and then cuts it in half for a counter offer. This back and forth offer-to-buy and offer-to-sell continues as the buyer acts as if he or she is giving their last Schilling away. Essentially everything can be bought for 40% off, but the barter is a long necessary part of the purchasing process. Oh, and whatever you do, don’t ask what the price of something is if you don’t intend to buy; you’ll be forced to go through the entire process without the ability to leave the store. Armed with the rules of the game, the kids put on their poker faces and dove into the shops.

Returning to the UAACC laden with trinkets of ebony, we continued our planning with another meeting with Juma. We’ve learned so much in such a short time and will be meeting with the Tanzanian lawyer this Tuesday. Juma also learned that the land adjacent to our current property can be purchased which would give us an additional two acres. This truly is an exciting development because our vision is to have a true Tanzanian working family home.

While there are plenty of institution type charities, our plan is to emulate the Tanzanian domestic culture as much as possible while providing a nurturing environment to those without families of their own - this mean as much self-sustaining as possible. Additional land would allow for the raising of chickens, cows, fish ponds, and agriculture as well as a playground…we’re excited!

Now this part is for the grandmother’s… 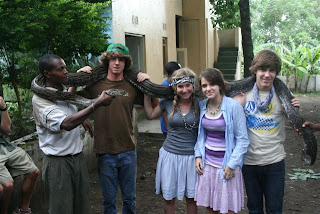 A 15ft, 100lb Python wrapped around the necks of your grandchildren. Such a sweet and cuddly pet!

The highlight of our day was when we headed to join the children and proceed to hand deliver the “Bags of Blessings!” As soon as we were in sight, many of them started running toward us to give us our treasured hugs…while running toward us they began singing “Making Melodies in my heart”, (the song we had taught them). What a joy to hear their beautiful voices! Mwajambo (the director) had all of the children sit down so that we could hand each one of them their bag filled with goodies.

It was so impressive to watch as the children sat quietly waiting until the last bag was handed out. In the States, it would have gone a little differently! As they began opening their bags we tried to capture it all on film. 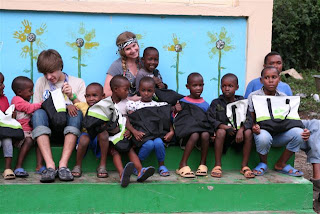 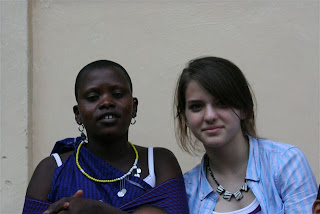 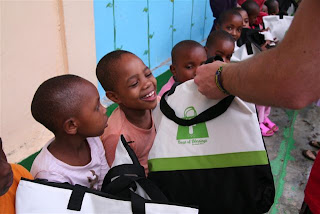 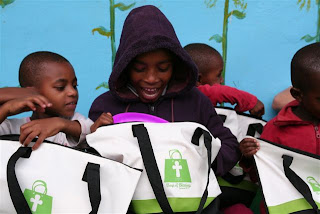 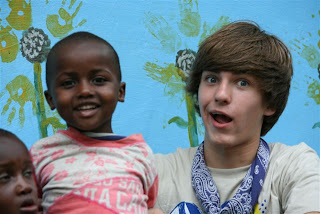 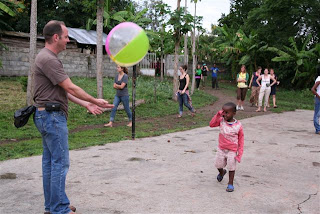 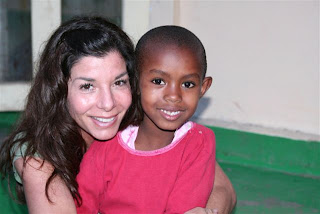 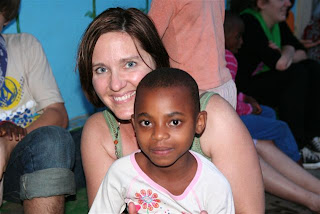 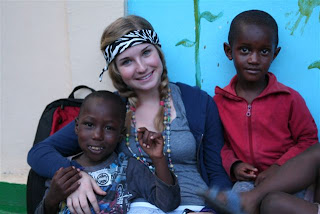 There is no way we can truly capture the Joy that each child possessed. One boy in particular had such a contagious Joy on his sweet face that it pierced right into our hearts and brought tears to our eyes. 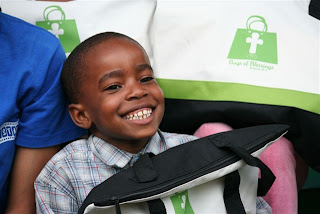 We sat watching them and playing with them, and quickly realized that even though we gave them the bag as a gift, it was truly our hearts that had received the blessing today!

Praise God for eyes that can see!